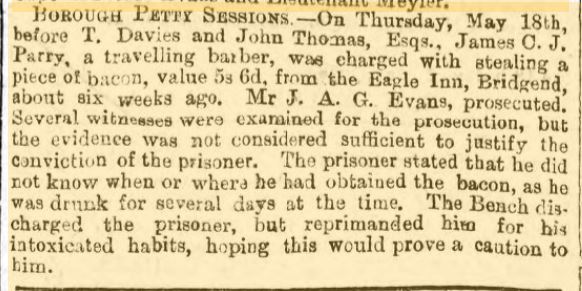 Transcript:
BOROUGH PETTY SESSIONS.-On Thursday, May 18th, before T. Davies and John Thomas, Esqs., James C. J. Parry, a travelling barber, was charged with stealing a piece of bacon, value 5s 6d, from the Eagle Inn, Bridgend, about six weeks ago. Mr J. A. G. Evans, prosecuted. Several witnesses were examined for the prosecution, but the evidence was not considered sufficient to justify the Conviction of the prisoner. The prisoner stated that he did not know when or where he had obtained the bacon, as he was drunk for several days at the time. The Bench discharged the prisoner, but reprimanded him for his intoxicated habits, hoping this would prove a caution to him. j
Notes:
Linked to
Eagle Inn , Bridgend/Castle Street, Cardigan