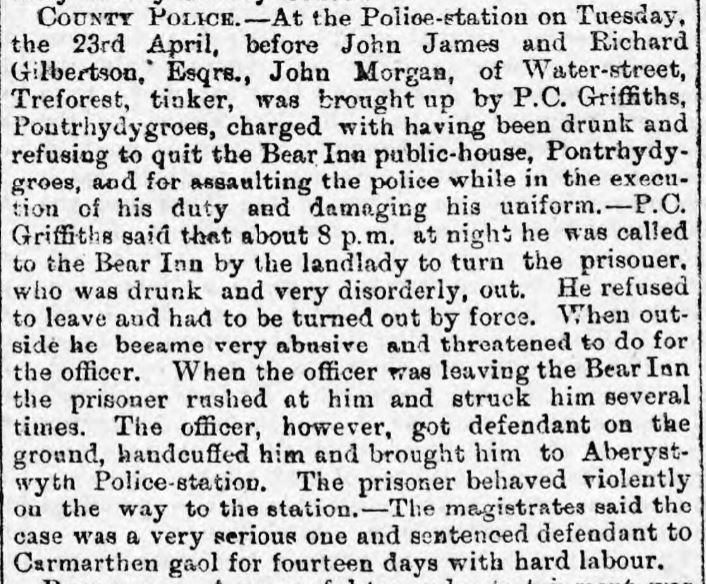 Transcript:
COUNTY POLICE.-At the Police-station on Tuesday, the 23rd April, before John James and Richard Gilbertson," Esqrs., John Morgan, of Water-street, Treforest, tinker, was brought up by P.C. Griffiths, Pontrhydygroes, charged with having been drunk and refusing to quit the Bear Inc public-house, Pontrhydygroes, and for assaulting the police while in the execution of his duty and damaging his uniform.-P.C. Griffiths said that about 8 p.m. at night he was called to the Bear Inn by the landlady to turn the prisoner. who was drunk and very disorderly, out. He refused to leave and had to be turned out by force. When out- side he became very abusive and threatened to do for the officer. When the officer was leaving the Bear Inn the prisoner rushed at him and struck him several times. The officer, however, got defendant on the ground, handcuffed him and brought him to Aberystwyth Police-station. The prisoner behaved violently on the way to the station. The magistrates said the case was a very serious one and sentenced defendant to Carmarthen gaol for fourteen days with hard labour
Notes:
Linked to
Bear Inn , Levelfawr, Pontrhydygroes