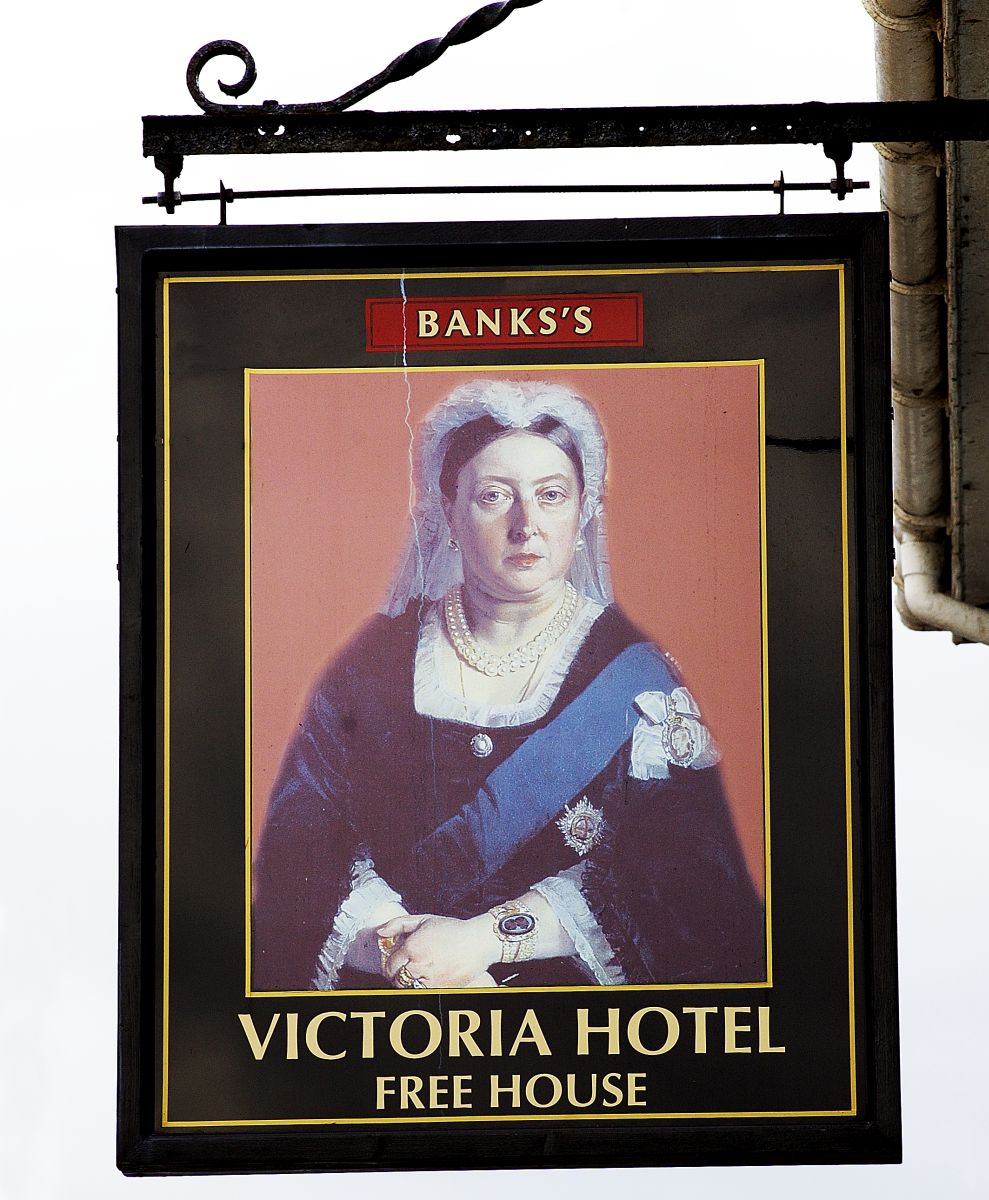 1867
" A license was refused to Evan Lewis, of the Victoria Inn, Aberayron, in consequence of his holding a farm near Dihewyd" Welshman 6 Sept 1867
1868 Davies, Mary, (Slater's Directory, 1868)
1875
licensee: Evan Lewis (Worrall’s Directory, 1875)
1882
"LOCAL LIQUIDATIONS Evan Lewis, of Cielbwch, in the parish of Dyhewyd) and Victoria Inn, Aberayron, both Cardiganshire, farmer and innkeeper. " Cardiff Times 8 July 1882

1891 Census
Evan Lewis Wid 65 Farmer and Innkeeper
Hannah Jones 24 Domestic Servant
1893
"At Aberayron Petty Sessions on Thursday Mr. Evan Lewis, of the Victoria Inn, was fined 10s. and costs for knocking a tramp named George Williams on the head with a poker and inflicting two large wounds" Evening Express 21 April 1893
1896
"Evan Lewis, landlord of the Victoria Inn, was charged by deputy-chief-constable, David Williams, Llandyssul, for unlawfully selling whisky which was adulterated with 31 per cent of water to Police-constable John Evans, Llanarth, at Dihewyd. He was fined 10s, including costs" AO 4 June 1896

1902
Occasional licence for Esther Lewis
"Caniatawyd i enw David Davies fod ar drwydded y Victoria Inn, Aberaeron, yn lie Esther Lewis. " Y Baner 12 July 1902
1904
"transfer of the licence of the Victoria Inn from the name of the deceased husband to the widow, Mrs. Davies." CN 13 May 1904
"Mr. David Davies, landlord of the Victoria Inn, died last week. His remains were taken on Tuesday last to Llanfihangel Creuddyn and. interred in the Parish churchyard there. He had only recently become a resident of Aberayron. He was, nevertheless, quickly recognized as a genial and generous neighbour, and there is a genuine feeling of sympathy with his widow and relatives." CN 8 April 1904
1905 Argument over will between Esther and David Davies brother and sister
1905
Petty Sessions: Aberaeron; number on list: 16; name of premises: Victoria; Parish / Place: Aberaeron; Licensee: Davies, Esther; owner or tenant : owner ; registered owner : Esther Davies, Victoria Inn, Aberaeron; free or tied: Free; tied to: [blank]; type of licence: full; on or off licence: on; number of licenced days per week: 7. (1905 list)
1910
Davies, James (Kelly’s Directory, 1910)
"The transfer of the Victoria Inn to Mrs. Davies. widow of the late occupier, was granted on the application of Mr. D. Pennant James, solicitor" WGWWA 29 Dec 1910
"Much sympathy is felt for Mrs. Davies and her family in her severe loss by the death of her husband, Mr. James Davies, saddler and licensed victualler, Victoria Inn. He was a man whom to know was to respect for an intelligent and well- balanced mind and for unswerving devotion, under the ills of shattered health, to the best interests of his family. His remains were interred at Henfynyw on Thursday, the 17th November" CN 25 Nov 1910 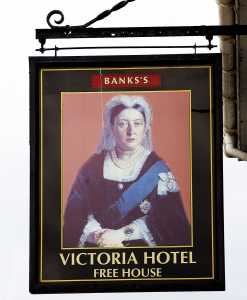 Suicide of a clergyman 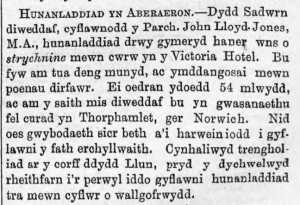 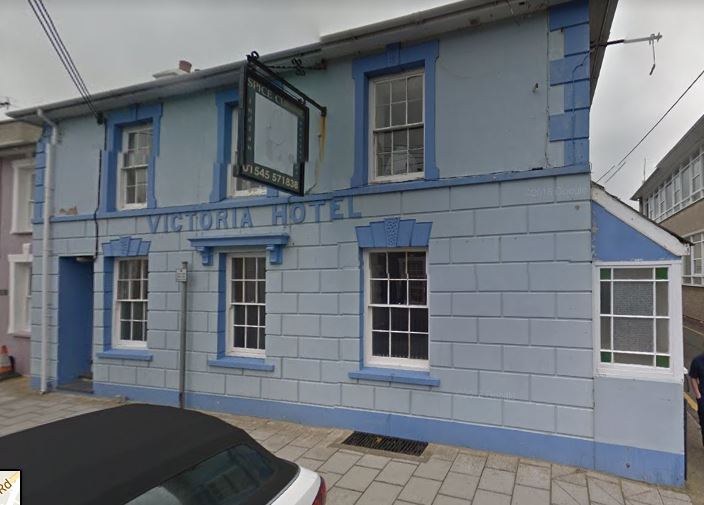 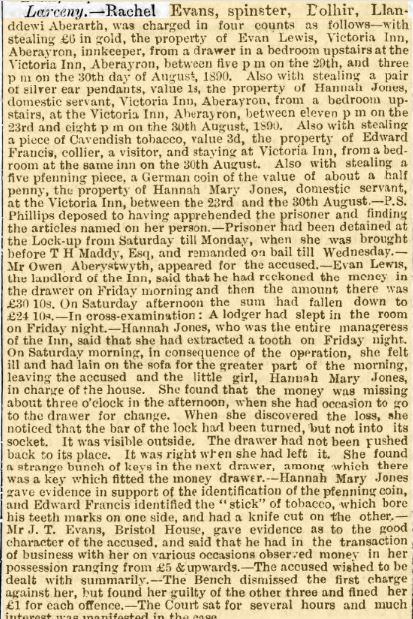 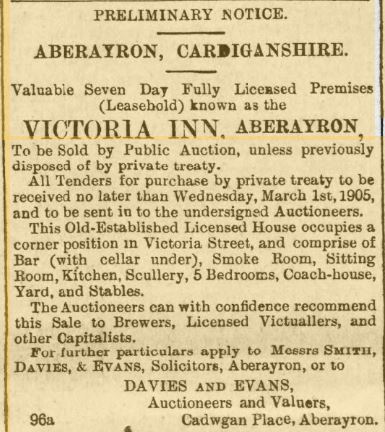 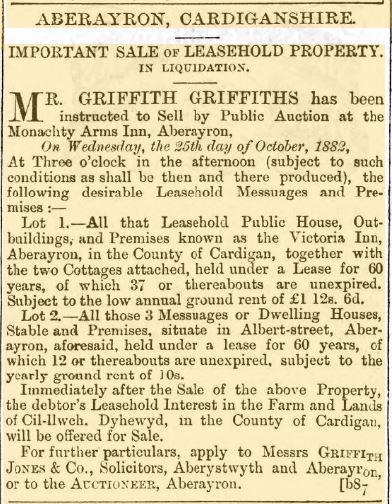