Details of pub: Inn on the Pier, Aberystwyth

Notes: 1919
Mr. Cooke (of Cooke, Brothers, and Roberts) agent for Sir Thomas Taken, applied for a renewal of the licence of the Pier Pavilion bar. The Free Church Council, for whom Mr W. P. Owen appeared objected. Mr. Cooke said that the Pier and Pavilion were to be taken over by a large company, and thousands of pounds were to be spent on the Pier and Constitution Hill. Mr. W. P. Owen contended that the last occupier of the bar on the Pier was Mr. Arthur Knapp, and he had left since 1916, since which time no application had been made and no money paid to the Licensing Authority Fund. The Rev. R J. Rees, on behalf of the Free Church Council, said that a public house on the Pier would do a lot of harm to the students of the Theological College. Mr Cooke asked for an adjournment so that he could employ legal aid. A renewal was refused
The Cambrian News and Merionethshire Standard, 7th March 1919 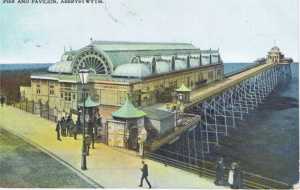