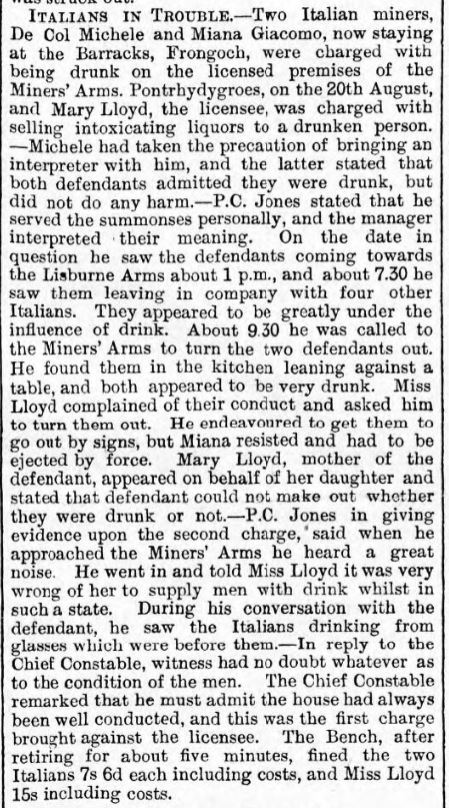 Transcript:
ITALIANS IN TROUBLE. Two Italian miners, De Col Michele and Miana Giacomo, now staying at the Barracks, Frongoch, were charged with being drunk on the licensed premises of the Miners' Arms. Pontrhydygroes, on the 20th August, and Mary Lloyd, the licensee, was charged with selling intoxicating liquors to a drunken person. -Michele had taken the precaution of bringing an interpreter with him, and the latter stated that both defendants admitted they were drunk, but did not do any harm. P.C. Jones stated that he served the summonses personally, and the manager interpreted their meaning. On the date in question he saw the defendants coming towards the Lisburne Arms about 1 p.m., and about 7.30 he saw them leaving in company with four other Italians. They appeared to be greatly under the influence of drink. About 9.30 he was called to the Miners' Arms to turn the two defendants out. He found them in the kitchen leaning against a table, and both appeared to be very drunk. Miss Lloyd complained of their conduct and asked him to turn them out. He endeavoured to get them to go out by signs, but Miana resisted and had to be ejected by force. Mary Lloyd, mother of the defendant, appeared on behalf of her daughter and stated that defendant could not make out whether they were drunk or not. P.C. Jones in giving evidence upon the second charge,' said when he approached the Miners' Arms he heard a great noise. He went in and told Miss Lloyd it was very wrong of her to supply men with drink whilst in such a state. During his conversation with the defendant, he saw the Italians drinking from glasses which were before them. In reply to the Chief Constable, witness had no doubt whatever as to the condition of the men. The Chief Constable remarked that be must admit the house had always been well conducted, and this was the first charge brought against the licensee. The Bench, after retiring for about five minutes, fined the two Italians 7s 6d each including costs, and Miss Lloyd 15s including costs.
Notes:
Linked to
Lisburne Arms , Pontrhydygroes
Miners Arms , Pontrhydygroes